The world of cannabis genetics has become professionalized over the years thanks to the work of several people. Scott Blackey, better known as Shantibaba, is one of them. 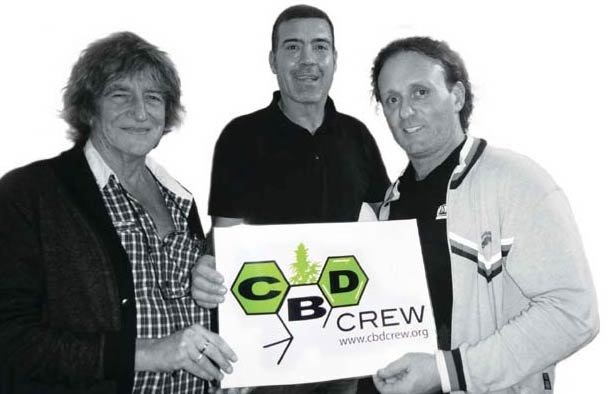 Scott Blackey, an Australian, always had a restless and curious character and loved science since he was little. He also tried out the first joint puffs, and laughed so deeply that he took an interest in this plant. When he started working in a nursery he saw how his gardening skills and his taste for the layman went hand in hand and decided to specialize in Cannabis. He then started to read and travel a lot, met people and cultures, learned to rub charas and at the same time he was making his personal seed collection. He the nature and numbers so much that he decided to study Sciences in the university and continued with masters in the fields of biology and psychology. Son of a doctor in mathematics he had a preference for the genetic field where numbers played the most. In the 80's, together with his father, he created his first indoor culture with lamps in a garage and from there his interest in experiments with several varieties intensified. Also influenced by the fact that in Australia there is a tradition of growing marijuana plants, especially in the Byron Bay zone, it was not hard at that time to obtain strains from Southeast Asia or countries such as India or Pakistan. This explains to a great extent why people like Scott or Neville Schoenmakers knew so much about marijuana cultivation.

The arrival of Shantibaba in the Old World

As a child he had traveled to Europe many times with his parents and although living for several years between India, Thailand and Indonesia, he was curious to try his luck on the old continent. Since he already knew the city of coffee shops and had made many Dutch friends in his trips, he decided to trade Asia with Amsterdam. Besides that, he fell in love with a collaborator of The Greenhouse who has introduced to him to several personages of the local coffee shops. By the 90's he began selling them hash and in fact got to win a prize with a strain of Pavarti.

Gradually, Shantibaba (that means "peaceful person") settled in Amsterdam and mounted some grows. He sold its strains through Arjan which had various coffee shops and then began to distribute its own seeds as well. In 1994 he joined Arjan to open The Greenhouse Seed Company, at the same time that he started working with Neville. At that time he also met the famous Howard Marks who had just left prison and with whom he is writing a book.

The Top of Success

The year of 1998 was a break year. He and Neville performed together at the High Times Cannabis Cup and won the first and second prizes of all categories. They especially emphasized the Super Silver Haze and Mango Haze. He also won prizes with his Shantibaba's Hash.

Also in 1998, Shantibaba received a very good offer from Switzerland to develop marijuana crops for cosmetic and medicinal uses. Besides that, there was a change in Dutch legislation banning seed production. Scott got separated from Arjan and sold its part to Greenhouse Seeds and settled in the neighboring country.

There he dedicated himself in the production of seeds for other companies and began Gene Bank Technology in Ticino. Although the company was legal, in 2003 the police set up the operation "Indoor", in which they arrested Shantibaba along with many others, seized all of GBT's assets and raised charges for drug trafficking. As a result, Shanti spent 2 years in jail. Luckily he had back ups of all his plants in 5 different countries, so any variety strain was.

Also in 1998 and in Switzerland he founded Mr. Nice Seedbank (MNS) next to Howard Marks with 40 plants mothers and fathers that he and Neville had perfected over the years. Between Shantibaba, Neville and Howard undertook a project that would allow growers from all over the world to have access to the best cannabis strains.

To this day Mr. Nice's business model is focused on specialized producers who not only seek to have a plant than buds but also a particular genetics. In fact, most of those who buy MNS seeds want good genetics males to make their own crops and crosses. Shantibaba in person moderates the online forum of MSN that is focused to cultivators of all levels so that they can go there for information or advice.

In his stage as a grower in Australia, Shanti worked with several strains but particularly with his Mallumbimby madness, some Afghan strains and a pair of selected sativas. By '95 he specialized in white ranges from which have emerged some delicious strains such as White Shark, White Widow o White Rhino.

Due to his years of working together with Neville Schoenmakers, Shantibaba managed to have an immense catalog of pure male and female plants, like the famous Skunk or the famous Haze, besides developing some strains that would go down in history. The main ones are Northern Lights #5, Widow, Critical Mass or Afghan/Skunk. All of them have been created thanks to years of work done by several people. The advantage of having worked as a team with the King of Cannabis is that they were able to carry out a collaborative work that never prevented them from making their personal choices when choosing flavors, aromas and aesthetics that they believed to be the best.

The major problem with these varieties is that the registered trade name is not tied to any specific variety. That is, when considering marijuana as a drug, there have been no legal genetic catalogs that states that a strain name correspond to a particular genetic profile. Thus, when Shantibaba separated from Arjan and took his plants, the trade names remained as property of Greenhouse Seeds but he kept the genetics. As a consequence, MNS have had to rename various varieties to differentiate their seeds.

His current crop projects evolve around Neville's Skunk, the Ash, some new sativas with which he is experimenting and even with the Rock n 'Roll series.

Although they are the latest shout of fashion, Shantibaba has never been too interested in the products that flood the current market, such as feminized seeds or the autoflowering seeds, that do not bring any interesting genetic improvement except for inexperienced growers, although he recognizes that these solve problems related to light cycles or selection of strains. Anyway, he always recommends using regular genetics. Although these new markets grow above normal seed sales, it will always be necessary for someone to ensure good genetics, to select the best specimens of each variety, and to work on new crosses. And that's what MNS does.

Cultivate Your Own Medicine

After many years and experiences around marijuana cultivation, Shantibaba is currently engaged in research and advisory work primarily, and develops several projects around medical marijuana. The Remedy (Remedy) is one of his latest projects. It consists of developing a variety of marijuana with enriched in CBD that can be used for therapeutic purposes, mainly for patients with multiple sclerosis or doing chemotherapy. CBD Crew is the team of experts and laboratories that drive this project to make the seeds accessible to people who can not afford the medication.

Even with all these activities he finds time to enjoy the day and nature with its family. While still working on cross-breeding strains he no longer focuses on getting the most potent product or even winning awards. He just devotes himself to the strains he knows best and personally likes them.

In fact after its experience in '98 has not been reintroduced to any contest since he considers that they have become a purely commercial instance and have ceased to have the excellence of the seeds as a target. Different would be if in these competitions the botanical qualities of the seeds were valued.