It is not easy to find people as consistent in their thinking and behavior as Soma. This sixty-year-old rastafari, of shamanic tradition, is in a constant search for connection with nature and for this it uses plants and crystals that provide a better ecological understanding. Beisdes that, he is a member and minister of the Church of the Universe, an entheogenic religion (that is, using psychotropic plants) that uses marijuana for the sacraments and defends nudity as a symbol of honesty. 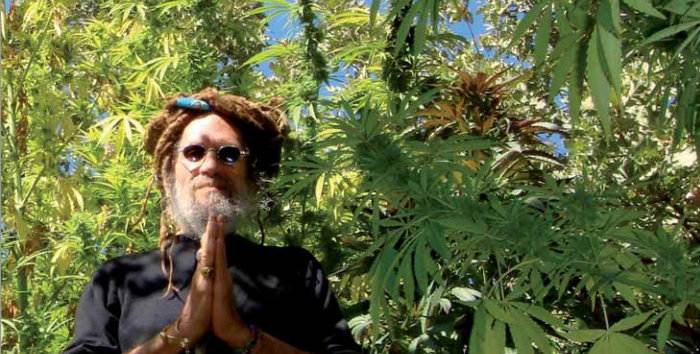 For Soma, Cannabis is not only a plant that serves for recreational purposes but has a spirituality and transcendence that goes much further. For him, marijuana is a master plant which teaches us about ourselves and our planet. It is a sacred plant, symbol of light.

The first joint would change everything

All this began at age 18 when Soma worked at IBM in a suit and tie. Never before had he tried marijuana until one good day (never better!) a companion passed him a joint and decided to smoke it quietly on the bank of the river. The feeling of calm that invaded him made him feel so good that he started to walk a path that has been walking for almost half a century. And so he discovered that Cannabis was one of the most positive forces in his life.

And although it is often said that marijuana discourages, Soma proves that this does not have to be true. In fact, in his case, marijuana has opened his mind and encouraged him to learn and explore a myriad of activities. In his way of seeing life, marijuana is a fundamental element to which he is not willing to give up in any way being present in his clothing, food, paper, medicine, etc.

Soma has dedicated more than 45 years of its life to marijuana, its cultivation and study. It started to grow Marijuana by the year 71 while still living in its native country, the United States. At that time he had a vegetarian restaurant and as he became aware of his diet, he was diving more and more into this organic way of life in harmony with nature and ecology.

From this awareness, he began using ecological methods in his marijuana crops and has not stopped until now. As a result of his philosophy of life, Soma only cultivates with natural methods. He prefers the sun to the foci, the guano or the algae to the chemical fertilizers, the earth to the hydroponics. Besides that, he points out that plants absorb a huge amount of energy, not only the sun but all of its environment. That is why he strongly discourages feelings like hatred or fear, which are at least counterproductive, unlike the feelings of love and gratitude that make plants thrive.

In '96 he decided to move to Holland and settled in Amsterdam, where a year later he founded his own company of marijuana seeds, Soma Seeds. The main feature of Soma Seeds is that it dedicates purely and exclusively to medicinal Cannabis, for which part of plants that have proven to have therapeutic effects, explores their genetics and produces seeds until he manages to stabilize a certain strain and from there throws them to the market.

The Sacred Cannabis, a Way of Life

Soma is not only dedicated to growing and creating new medicinal marijuana strains, but everything around him bears the Cannabis brand. For starters, almost all of his clothing is handmade based on hemp fiber. But in addition to his personal life, Soma is a pro-marijuana activist and participates in conferences around the world. In its own Youtube channel he writes articles for several cannabis magazines and has written his book "Organic Marijuana Soma Style".

For Soma, it is essential to realize that we are one with the universe, to work with each other, to care for the planet and to achieve a harmony and brotherhood. And Cannabis is a way to access this state, to share and be at peace. Or, in his own words, marijuana is a tool to save the world.

Soma is not only an advocate of medical marijuana, but also a patient who witnesses the healing effect of this plant. Almost a decade ago, and because of a problem of aortic calcification, he had to undergo open heart surgery. For 6 months he was under the effects of cocktails of medicines prescribed by the doctors but he could not feel good until he decided to leave them. Since then, his only medication has been marijuana and he is in excellent health. In fact, it has a medical prescription of 10 to 15 grams daily, that consumes them not only smoking, but also with vaporizers or in foods.

As a result of all these experiences and personal experiences, of the spiritual value of marijuana, of the states of consciousness that it opens and of its capacity to twin people, Soma defines himself as the "cannabis bodyguard", with the mission of defending it before the threat of annihilation on the part of the states and their laws, even if in them the life was left to him.